The skeletons of the people of Herculaneum were found sheltering in boat sheds in 1982. This came as a great surprise to the archaeologists excavating the site as up until the discovery of the skeletons, it was accepted that the people of Herculaneum had all escaped and evacuated the town. Really, those in Herculaneum at the time of the eruption thought that the boat sheds would be the safest place to escape to and that they would be protected from the earthquakes and the eruption of Mt Vesuvius. However, the extreme heat from the pyroclastic  surges incinerated their flesh within seconds and resulted in many people's brains bursting from the pressure and heat, leaving holes in the skull. Up to 20 individuals were found in each boat shed chamber and 300 skeletons in total were excavated.
Analysis
The skeletons found at Herculaneum show great level of genetic diversity 1 which adds to our understanding of the town of Herculaneum as a town with a great mix of different people. From analysing the bones, teeth and other aspects of the skeletons a lot can be revealed about ancient Roman life. From looking at the teeth of the skeletons it was found that there was a very low occurrence of cavities and tooth decay, in fact only 3.8% of individuals had decay. 2 This highlights how the Roman people must have taken good care of their teeth and/or their diet must have been relatively healthy to support strong teeth and not cause decay. Their good dental health must have been to a certain extent due to the absence of sugar from the ancient Roman diet and the Romans high consumption of seafood (especially important since Herculaneum was a seaside town) which contained high levels of fluoride would also have been a contributing factor. From this evidence we can be even more sure that seafood was a staple food in the diet of those living in ancient Rome and in towns like Herculaneum at this time. A large number of people also showed a slight underdevelopment of the enamel on teeth which is often linked with malnourishment but it has also been found in healthy communities who ingest great amounts of fluorine and this is most likely the case with Herculaneum. This is because toxic level of fluorine have been associated with volcanic activity which release emission of hydrogen fluorine which can contaminate food and drinking water, showing the effects of the people of Herculaneum living next to Mt Vesuvius, a volcano.3 By analysing the amount of different minerals in the bones, the nutrition of those at Herculaneum can also be determined. High levels of strontium were found from the skeletons and this is an indication that the diet of those at Herculaneum mainly consisted around seafood and vegetables. One disease found in high frequency in the skeletal remains of people at Herculaneum was pleurisy (an inflammation of the membrane surrounding the lungs) which was identified by observing damage on the ribs. This reveals to us, how even in their time, the Romans were exposed to pollution which caused respiratory diseases. Pleurisy was not dependent on sex or age, it affected both children and adults of both sexes. Some factors which caused pleurisy were how polluted the air of Roman houses were where animal and vegetable oils were burned in lamps, there were no chimneys, wood and manure was burnt for warmth and the ventilation was poor. Through this indoor pollution, the people would have inhaled plenty of toxic fumes and a large amount of carbon particles.4 Sixteen adult skeletons found in Herculaneum also showed signs of having the recurrent infectious disease of Brucellosis which is caused by various species of Brucella bacteria and is contracted by eating the meat, milk, yogurt or cheese from infected animals such as goat or sheep. Since only 10% of cases of Brucellosis show skeletal damage in the vertebrae it is very possible that a larger amount of people in Herculaneum were affected by this disease but had not developed any skeletal damage.5 This gives us insight into what kinds of diseases were prevalent in ancient Rome and also shows us how in order to contract this disease, the Romans must have eaten animal products, like goats cheese. The skeleton of a woman at Herculaneum also had some incredibly well-preserved hair near her skull and when examined microscopically, one strand of hair had an egg from lice on it. The woman also had some small depressions in her skull from excessive scratching. In fact 22% of the skulls showed similar depressions 6, so we can assume that lice were not uncommon in ancient Rome. 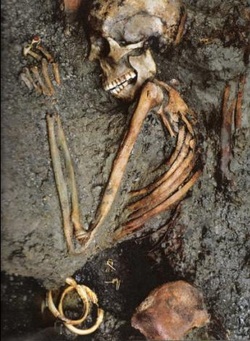